From their Dark Horse Album, Nickelback sings, “If Today Was Your Last Day.”  The central theme discusses a principle I am struggling with, centered around a question, “Why do we wait?”  The song’s lyrics include the following:

“My best friend gave me the best advice
He said, “Each day’s a gift and not a given right.
Leave no stone unturned, leave your fears behind
And try to take the path less traveled by.
That first step you take is the longest stride.”

From the Live Like You Were Dying album, Tim McGraw, sings a similarly themed song of the same name, with the following lyrics:

Said I was in my early 40’s
With a lot of life before me
When a moment came, that stopped me on a dime
I spent most of the next days lookin’ at the x-rays
Talkin’ ’bout the options and talkin’ ’bout sweet time
Asked him when it sank in
That this might really be the real end
How’s it hit ya, when you get that kind of news
Man what ya do
And he says

I went sky divin’
I went Rocky Mountain climbin’
I went 2.7 seconds on a bull named Fu Manchu
And I loved deeper
And I spoke sweeter
And I gave forgiveness I’ve been denying
And he said someday I hope you get the chance
To live like you were dyin’

The follow-up question continues, when will you finally start living big?

Why do we wait?

Why do humans wait to begin living until they get a death sentence?  Look, I have lived my life as hard and as full as possible, not because I am dying, but to eventually be an interesting old person.  I remember sentiments from reading books as a kid, things like, “it’s not how wide or how deep you live that matters; it’s proving you lived at all.”  Or, “if you go through life without collecting scars and enemies, you’re a coward or worse.”  I do not understand about waiting for some earth-shaking revelation before you take time to laugh, be adventurous, explore, or forgive.

I talked to a person back in Ohio; his Father-In-Law dropped dead suddenly.  There were no health indications, no warning, no previous symptoms, just got up one morning, took a step, and fell down dead!  The man I was speaking to claimed this shook his wife, marriage, and family, but it would not change him.  He was rushing to a meeting for a job he hated, to go home to a family in turmoil, and he had no clue what to do.  Just a casual conversation, the man was not looking for answers; I would not offer advice.  I wished him well!

He had a long list of things to do in his “Some-Day” Bucket List.  When is someday?  I cannot find this as a day of the week on a single calendar.  Yet, how many times a day is a person dreaming of “someday” when they plan to start living?  Please do not get me wrong; I am not claiming we all need to be “Eat, Drink, and Be Merry for tomorrow we die” people.  I am arguing we might want to stop waiting for the bus to someday, to take us to a place called somewhere, so we can become people we refused to be all our lives.

Ernest Lawrence Thayer wrote a poem I favored as a child called “Casey at the Bat.”  Not to ruin the poem, but the last stanza is essential.

“Oh, somewhere in this favoured land, the sun is shining bright,
The band is playing somewhere, and somewhere hearts are light;
And somewhere men are laughing, and somewhere children shout,
But there is no joy in Mudville—mighty Casey has struck out” [emphasis mine].

The land of somewhere, where people live like they never lived in real life, is that mythical place of rainbows, lollipops, roses, and summer bands. 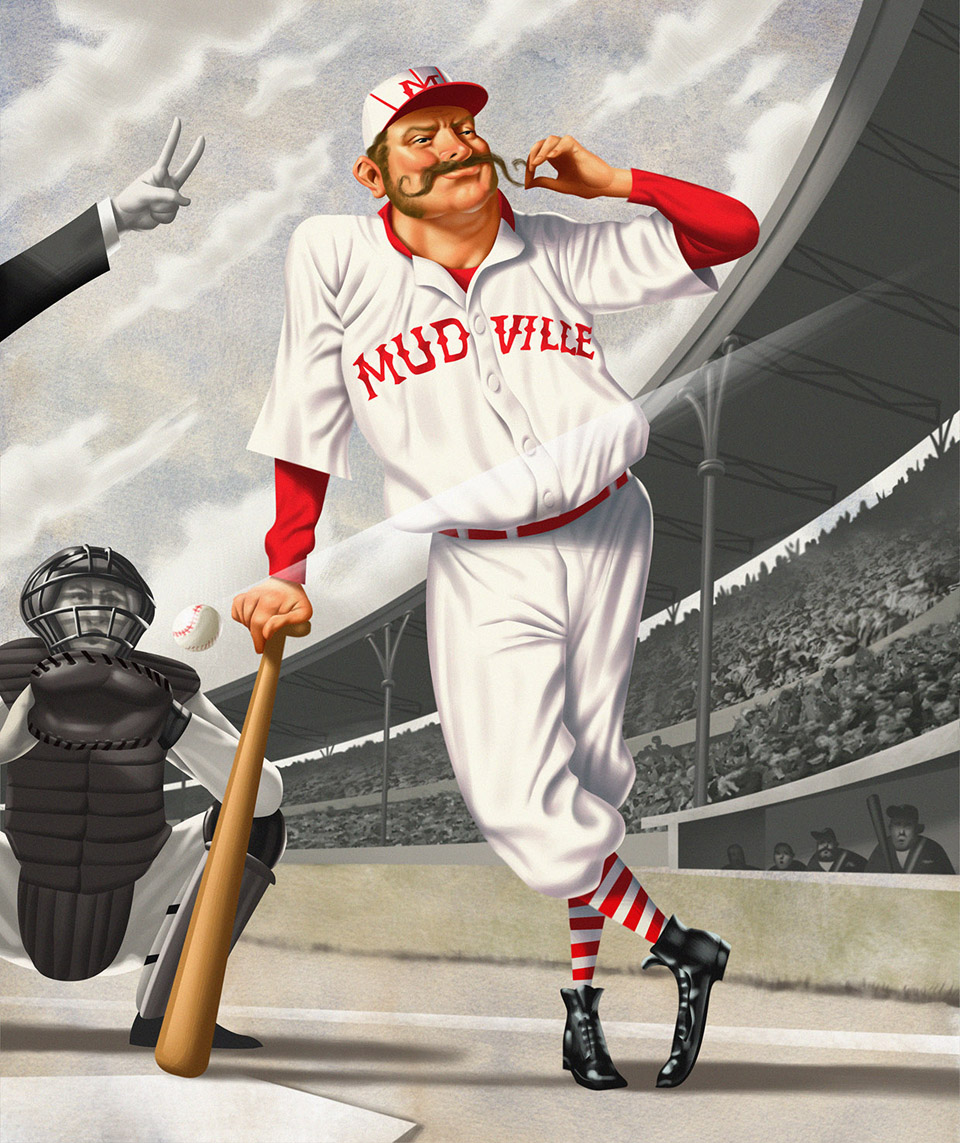 James Wilson wrote a sequel to “Casey at the Bat” titled “Casey’s Revenge.”  Again the final stanza holds a clear message for us.

“Oh, somewhere in this favored land, dark clouds may hide the sun.
And somewhere bands no longer play, children have no fun;
And somewhere over blighted lives there hangs a heavy pall;
But Mudville hearts are happy now — for Casey hit the ball!”

The final Casey poem is called “Casey 20-Years Later,” authored by Clarence P. McDonald.  The Mudville Nine were hurt; they needed a player to finish the game.  The coach appealed to the crowd for a player to come and play.  An older man from the crowd, unknown and unnamed, claims he knows baseball and can help finish the game.  The game continues, and the stranger comes to bat; he hits the game-winning hit and stands there and cried.  For the stranger was Mighty Casey, the man chided and derided by the crowd so many years before. 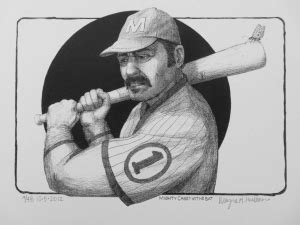 I have always wondered what happened between the first, the second, and the third poems about Mighty Casey.  The humility it took to play again.  The kindness he showed to the audience and other players, the respect he showed to the umpire.  So many lessons, but the number one among them all, why are we not living larger, deeper, fuller?  Why do we worship sports heroes instead of being sports heroes?  Why do we settle for the daily grind when even in the daily tasks, there are things to discover, new things to learn, new experiences, and new methods of doing things that will surprise us if we but take a risk.

Growing up in Maine, I learned something the day I had 20 loads of laundry to complete, no dryer, and the temperature was dropping like a rocket sled on rails.  Did you know you can hang clothes on a line outside, in the freezing cold, and they will dry?  My fingers just about froze stiff, the laundry was freezing faster than I could hang it, and I had to iron a bunch of wrinkles out.  But, what a cool (pun intended) lesson.  The clothes came in dry, smelled of the Maine woods, wood smoke, and had a crisp smell that I cannot forget.

On my 30th birthday, I was in Maine again; my wife bought a birthday dinner at Red Robin.  I had some great food that day, but the memory that stays in my head, clear as a new spring morning, was the table cube.  On this cube was a picture of a man, standing outside a plane hangar, looking for all the world as confident as he can.  The heading, “All I want to be when I grow up is an interesting old person.”  At this moment, I knew what I wanted to be when I grew old, an interesting old person.

People had been asking me what I wanted to do or be when I grew up for years and years.  I never had a clue.  I had already been a fireman, a diesel mechanic, a truck driver, a shepherd, a dairy farmhand, a blueberry harvester, a paper delivery boy, been through the US Army and US Navy, as well as a trip through the US Army National Guard.  I had worked in call centers, been a general contractor, a business consultant, worked in multiple warehouses in different roles, and so much more.  When I turned 30, my wife and I had already racked up 20+ moves, traveled uncountable miles across the lower-48 states, and had some crazy life experiences.  The US Military had already sent me ¾’s of the way around the world.

But, I finally found what I wanted to be, an interesting older person.  Thus, when I hear these songs by Nickelback and Tim McGraw, I cannot understand why wait?  Why live large and adventurous only after getting a life sentence?  Why withhold forgiveness and forget the past only after it becomes apparent you are going to die?  Did you forget that everyone has a death certificate waiting?  Did you get stuck in a rut, put on blinders, and forget that life is more than just breathing in and out and turning food into mulch?

The poems of Casey relate a tale of humanity and the songs of Nickelback and Tim McGraw relate that it is never too late to help someone unless you’re dead!  Why wait?  Why hold off on living larger, deeper, fuller lives?  Why not volunteer?  Why do we wait to act like we care until a few days between Thanksgiving and Christmas but spend the rest of the year not living at all?  These are just some random questions, two really good songs, three incredible poems, and my brain trying to make sense.