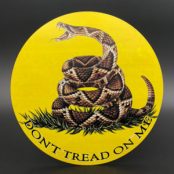 Plato has a point, “The price of apathy towards public affairs is to be ruled by evil men.”  When writing about the Department of Veterans Affairs, the Internal Revenue Service, or the United States Postal Service, one must remember, these organizations have been intentionally designed to be as bad as they are.  The government worker refuses accountability, shuns responsibility, and simply wants to exist doing as little as possible for as much as possible. 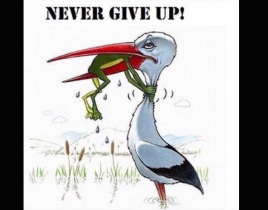 While Plato has a point about apathy in public affairs leading to being ruled by evil men, what is lost in the discussion are the staff members.  Tom Clancy wrote about how a jet airliner took out both houses of the Congress, SCOTUS, and Vice President Jack Ryan suddenly found himself as President Ryan, rebuilding the entire US Government.  This Tom Clancy novel takes a person into the inner workings of the US Constitutional Government like no other book I have ever seen.  Best of all, he explains the intoxicating power the staff members, the executive assistants, and undersecretaries hold over the political appointees to hinder progress, stymie change, and control their fiefdoms against all forces of influence.  This is the root of designed incompetence.

What is an excuse?

An excuse is a method to reduce blame attached to an action, defend, or justify one’s actions, an attempt to release one from accountability, or a poor or inadequate example of something.  As children, we are taught excuses are like noses; everyone has one and picking it in public is disgusting.  Yet, when something happens, two types of people emerge, those who make excuses and those who take responsibility and work to fix the problem.

What is designed incompetence? 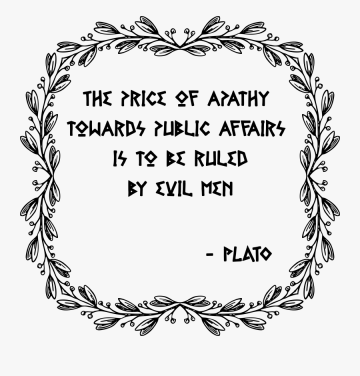 Example of an excuse: 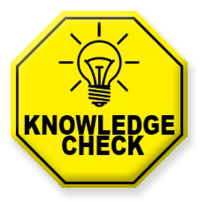 Designed incompetence is the root cause for the toxic government employee workplace cultures.  When responsibility is shirked, the human psyche feels moral distress, and as the moral distress grows, so to does the self-loathing, self-hate, and feelings of hopelessness.  Worse, some people, who have constantly been ethically challenged or morally bankrupt, will use these feelings of self-loathing to capture power.  Once captured, the power becomes a drug, and that drug is highly addictive.  Thus, a self-fulfilling prophecy from Plato becomes true, “Apathy towards public affairs is to be ruled by evil men.”  The more the morally bankrupt and ethically challenged win power, the bigger an example to others of how to obtain power in government they become.  But the remaining people who do not receive power are left with a toxic workplace, full of inert people.  Motivating inert people in a toxic culture, who are already feeling the stress of acting morally indifferent will leave multi-generational scars on the workforce.

An important point that requires mentioning, “it is not for the lack of money or technology to pinpoint abuses and problems with employees; it is all the inertia of the leadership towards action and the toxic culture which allows and encourages pushing the boundaries that are killing veterans in the VA.”  The same is true for any of the alphabet agencies created by the Federal Government, state government, and local government.  Walk into a DMV and tell me if you cannot sense a toxic and inert culture is driving down customer service levels.  Walk into a welfare office and tell me the people working one side of the counter are not inert.  Worse, walk into any IRS field office and tell me how you feel being around the morally bankrupt and ethically challenged. 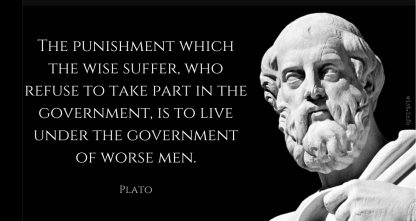 I met some school board officials in Albuquerque, New Mexico, and was appalled at the lack of ethics and morals they displayed.  Judges and lawyers are driving drink and skating accountability because of their positions and so much more.  All because the designed incompetence in government promotes those who have the least reason and ability to be promoted.  Plato is absolutely correct, “The punishment which the wise suffer, who refuse to take part in the government, is to live under the government of worse men.”  For too long, government employees have been allowed to run the asylum while the best and brightest pursue goals in the private sector.  If America is to win back her government, the citizen must stand and boldly proclaim “NO!” and then get into government service to change the toxic and inert cultures.

Plato might have been mentioning the following about elected officials, but I find it apt and applicable to the designed incompetence by the staff members, “One of the penalties for refusing to participate in politics is that you end up governed by your inferiors.”  The first time I met my director as a VA employee, I knew two things, she hated me, and I was doomed to suffer under her inadequacies.  Both of which came true over the following 360-days.  The intransigency of the leadership in administrative positions at the VA is frightening.  Ending these abuses of power is the preeminent position of every citizen in every democratically elected society.

The scourge of designed incompetence must end.  If this means eating soup with a knife, then we must eat the bowl of soup to the dregs.  But, we must act if we are to save our countries from the politicians and the staff that have infested our governments!